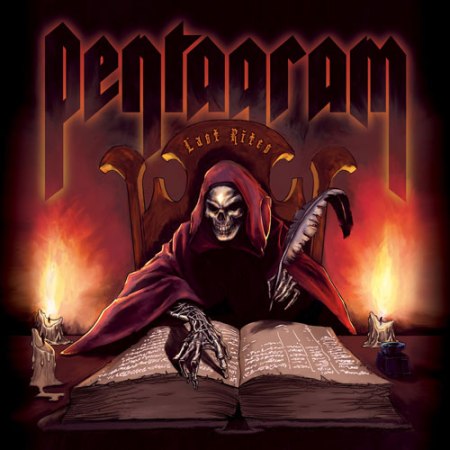 PENTAGRAM, the band that has been churning out widely admired hard rock/doom metal for over four decades, has just revealed the track listing and artwork to its highly anticipated new album, 'Last Rites'. Due on April 12 via Metal Blade Records, the CD contains 11 new tracks of behemoth tunes that fans have been clamoring for since the last Liebling/Griffin masterpiece was released in 1994 ('Be Forewarned').

The cover artwork for 'Last Rites' was handled by Mo Moussa who is best known for his work with Marvel and DC Comics. Mo Moussa's other credentials include New Line Cinema, Nickelodeon as well as the four major TV networks. A Philly native and a huge fan of underground music, his work also graces the covers of several of his favorite local bands, including Total Fucking Destruction.

Cult rock legend Bobby Liebling has been churning out genre-defining and highly admired hard rock/doom metal for over 40 years with PENTAGRAM. Within its first decade, the band is largely regarded as co-creating two subgenres of hard rock — heavy metal at the birth of the 1970s and doom towards its death. PENTAGRAM's classic 'Death Row'-era line-up and the band's debut album, 'Relentless' (1984), was inducted into Decibel magazine's Hall of Fame in 2010. Guitarist Victor Griffin's invention of the "Drop B" tuning is first heard here. This heavy-handed hallmark went on to influence handfuls of players and defined a subgenre.

PENTAGRAM will be on tour in Europe in April 2011, presented by Vibra Agency, Metal Blade, Cosmic Lava, and Rock Hard. Go here to see all dates.